I decided to try to cure my own salmon this weekend.  It was tasty (although a bit salty). 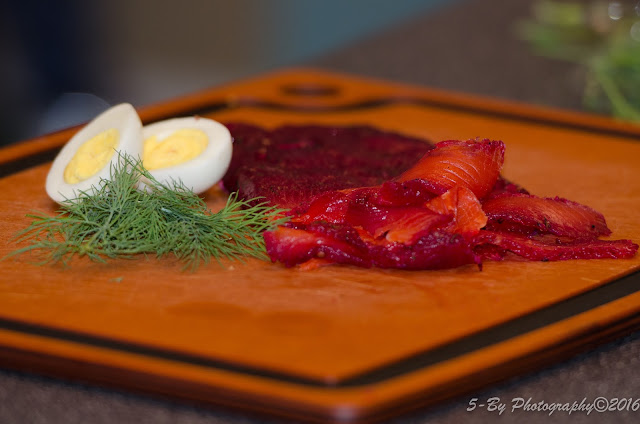 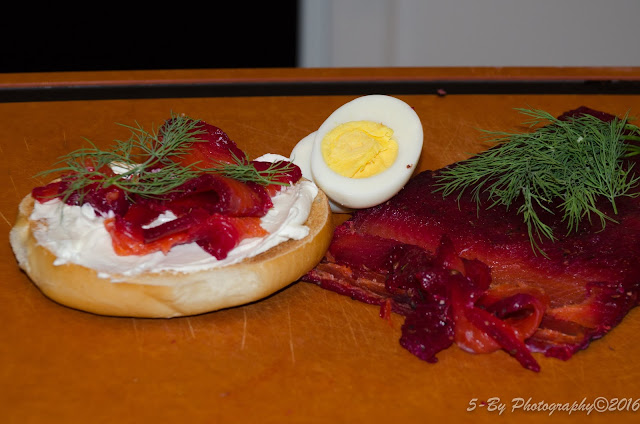 Dayton has a fen that is little known.  The metropark has restored it and built a small trail and boardwalk.  I went for a short walk there yesterday.  Looking forward to seeing it in the spring and summer. 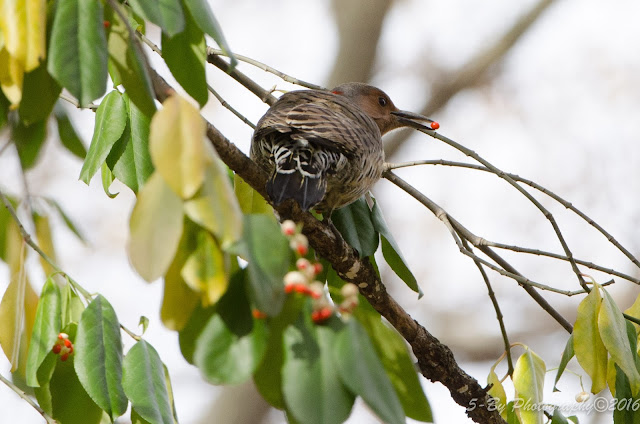 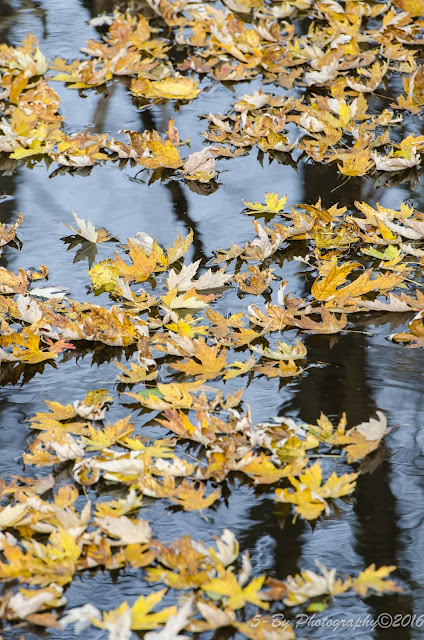 Another Race Report: Feral Hog -- Really delayed, not many pictures 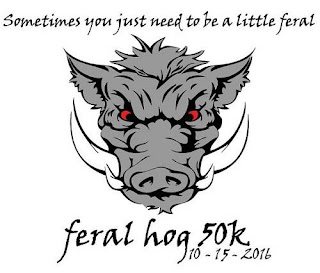 I was recently reminded that I never posted a race report on Feral Hog 50k.  So here it is.  I didn’t take a camera with me, so there are no photos that I can claim credit for. (thanks to Geri and Geoff Ahlers for the photos.)

Feral Hog 50k 2016 was an inaugural event put on by Mary Vincent as Race Director. The Feral Hog 50k is a one loop course traversing the backpack and perimeter trails of East Fork State Park. The majority of this course is on trails that were first blazed by a man training to traverse the world on foot, Steve Newman, aka the World Walker.  It was these trails that Steve trained on prior to his solo around the world from April 1983 to April 1987.  Mary was even able to get him to come out and give a brief talk on his walk prior to the start of the race.

In 2015, when training for Cloudsplitter, I stumbled upon this trail, but was unable to find any info on markings or course, so quickly abandoned any plans on running the trails. (I don’t like the idea of getting lost, even within an hour of home).  When I found out about Mary’s race, I was in. Especially since I love single loop courses!  There were 3 training runs held in Aug and Sept, running different sections of the course for familiarity.  The first two sections were rolling horse and hiking trails, which then transitioned to the mountain bike trails. The last section was going to be the toughest, given the fact it was the hillier section, as well as had some downed trees from storms.

Mary pulled together some great swag, to include a custom flask.  Originally, you had to finish in 6.5 hours for a flask.  After the second training run, I knew that was going to be tough.  Luckily, Mary recognized that and increased the time limit for the coveted flask to 7 hours.  (overall time to finish is 10 hours).  I wanted one…
Mary had a good mix of manned and unmanned aid stations set up along the course.  It was however a paper-less race, so bring your own.  I decided to take my smaller pack with one collapsible bottle of tailwind, carrying two tubes of additional for those in-between aid stations.  Drop bags were available at the 12ish mile point.  I put additional tailwind and my other collapsible bottle there. (as well as solid food).  In addition, I had 1.5L of water on me, so I didn’t bother to take an extra cup, knowing that I had the collapsible bottle that I could refill if necessary.

Due to some dental surgery in early Oct, I didn’t run a step for the two weeks prior.  I called it ‘extreme tapering’.  It didn’t seem to hurt, my legs felt fresh and ready to go.  In fact, they were too ready at the beginning, which was really runnable 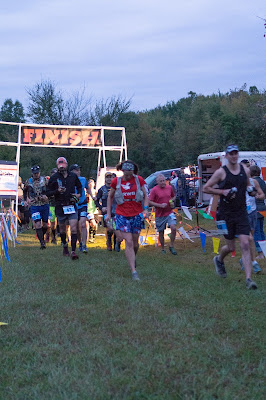 I felt good, temps were in low 70s and expected to climb to the low 80s.  We hit the single track fairly quickly and with it the muddy hollows that come from the trails also being horse trails.  This was the first time I had raced with a gps, and in my occasional glances, kept thinking I was going out too fast.  I was with the lead men, but breathing easy and feeling great.  At one point, I made the comment that if we kept up the current pace, we’d be under 6:30 easily.  Bad thing to say that early in the race…

Around the 2 mile point, I reached for my tailwind, only to not find it…somehow it popped out of my vest!  No worries, I had packed the extra at mile 12, until then, I’d get by on water and the food I was carrying (except at the one aid station, there I grabbed a potato).  Got to mile 12 and my drop bag right on schedule, the Team RWB folks manning the station were great!.  I immediately downed a Tailwind and made another to go.  On the way out, I grabbed a cheese sandwich.  Imagine my delight when I took a bite and found out it had bacon!  I almost turned around for another, almost, but I had a flask to win. 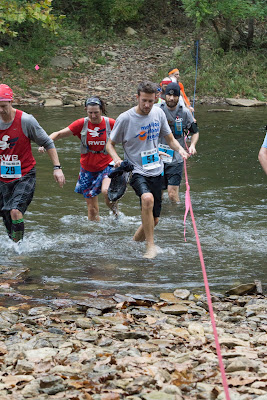 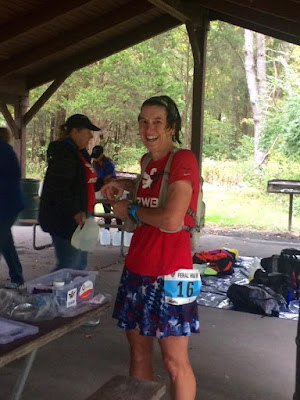 Losing my tailwind turned out to be a bigger deal than I realized.  Around mile 18, my calves started to cramp, followed by my hamstrings, then my quads…I have not had this issue since Marine Corps Marathon in 2007.  I kept moving forward at the best I could.  This was the hilliest portion of the course, so it was slow already, but the cramping made it worse.  I started watching my time slip away.  I yelled at my legs to get moving, and to my surprise they did, only to cramp up a few minutes later.  I hit the mile 26 aid station, got some endurolytes and pickles, and refilled my tailwind.  I had an hour to do the last 5+ miles (turns out the course was a bit longer than 31 miles) and still get a flask (remember, finishing was not my goal…I wanted that flask). 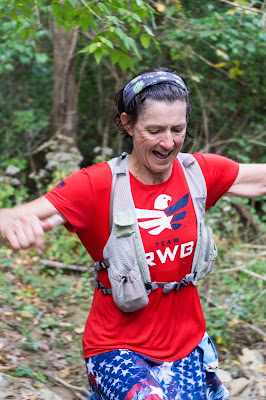 Finally, I hit the last 2 miles (luckily flat) and I was running the best I could, and I was surprised to see I could still get average under a 12 min/mile.  I swear the end should have been around every corner, but it wasn’t.  Finally, I found the turnout of the woods and to the finish line.

I finished in 6:51, earning 1st place Female and 7th overall.  Best of all…I earned that flask! 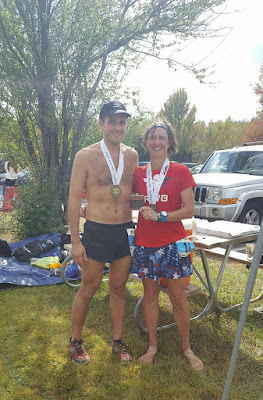 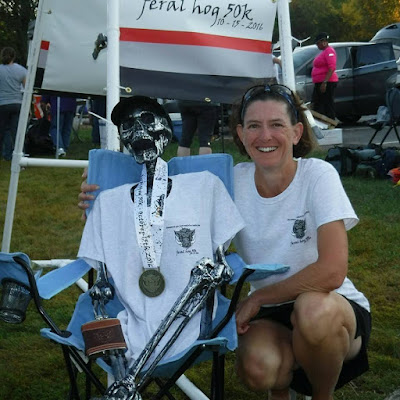 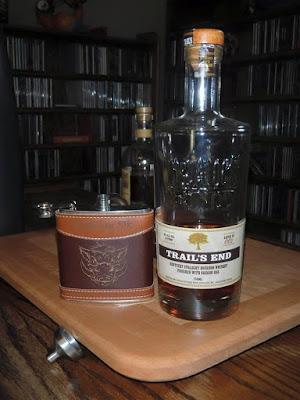 This was a great race, the aid stations were manned by runners who knew how to keep one moving and what to do.  The swag was amazing.  Afterwards, hot showers were available and the town of Williamsburg was holding a BBQ Festival and invited runners to join them. The local brewery, Old Firehouse Brewery, offered a free beer to runners.  What a great after-party!

I don’t know if I can run this next year, given that I will run my first 100 miler in late September, but if not, I do hope to volunteer and be part of the fun.

I did go back and try to hike the first few miles in search of my errant tailwind bottle.  I got about a ½ mile and slipped into the mud.  After speaking with the course sweep, who didn’t see anything, I decided that someone must have picked it up, or it is so lost that no one will ever find it.  Oh-well, need to be more careful with that pack.