So, this isn’t the typical blog posting from me…you note the lack of photos.  I wanted to put down my memories (fuzzy as they are) from my first 100k.  I’m still on cloud nine! (pun intended)
Cloudsplitter is an out-and-back course along the Pine Mountain Trail along the KY/VA border.  It starts in Elkhorn City KY and turns around at Pound Gap, VA.  The 100k has 17,000 feet of elevation gain.  This is the second year of the race.  Mark and I ran the 25k last year and had fun.
To say I was nervous is probably an understatement.    I had my nutrition and hydration down and was finally eating. during ultras  However, my training plans are completely unorthodox.  I don’t run back-to-backs, nor do I run lots of training mileage.  In fact, I averaged about 25-35 miles a week, with a few weeks in the 40s, but many weeks in the high teens.  It is definitely not the typical 100k (or 50 miler) training plan.  However, I also follow those long runs walking a round of golf, so I’m on my feet all day.  In the preceding 4 months, I had run a marathon, a 50k and a 30 mile training run on the Cloudsplitter course.
Two weeks prior to Cloudsplitter, I ran my last ‘race’, the AF ½ Marathon, a relatively flat course.  While I finished strong, I didn’t PR like I felt I was capable of.  There was a point in the race when it was a drag to keep going.  That really hurt my confidence.  However, as Mark kept pointing out, it was also the longest road running I’d done over the last few months.  As we got closer to race day and I was tapering (sort of), my runs felt great. I ran a few short night runs to familiarize myself with night running again.
Since the plan was for Mark and me to fly down to Pikeville, we watched the weather closely.  About a week out, everything looked good, so we got a rental car and started making plans.  Unfortunately, a hurricane in the Atlantic changed those plans.  By mid-week, the weather forecast started looking terrible.  At one point, it was calling for almost 2 inches of rain on Sat.  It was going to be a mud-fest (again).  2015 will be remembered as the year of mud.  I had 4 big races this year; three of them were held in muddy conditions.
On Friday morning, we woke up and checked the weather.  While we could have flown, it would have been on the edge of our comfort level, so we decided to drive.  We checked into our hotel, drove out to pick up the race packet, then dinner.
Dinner was my downfall.  Looking at the menu, I carefully decided to pass on the fried banana peppers.  However the zucchini hush puppies sounded great, and for some reason it never occurred to me that they too are fried.   They were tasty, but my already nervous tummy decided that it was not happy with me at 3 in the morning.  Food would once again be my downfall, I was sure of it.
Waking up on Sat morning, the weather forecast was still ugly, but the amount of rain was significantly less.  We’d still be in the clouds all day, so no pretty views that we had on the training run.  The plan had always been for Mark to meet me at Pound Gap, the turn-around point at 50k.  With the rain, I asked him if he’d also meet me at Birch Knob (25k/75k).  His willingness to wait around for hours was a game changer for me.
With my stomach in knots, I barely got an English muffin and peanut butter down for breakfast.  On the drive to the start line, I was able to drink some Tailwind, so I had some calories in me, but not an ideal situation.  This would last almost the entire race.  I could barely eat anything without my stomach revolting until mile 54.  Tailwind was a race saver for me.  I never did drink as much of it as I thought I would, but it kept enough calories coming into me that I never bonked.  Slowly, I was able to eat some other solid food, such as potato soup, sandwich and of course the DLM Salted Caramel Killer Brownie that Mark had waiting for me at 50k.
Pre-Race Photo: 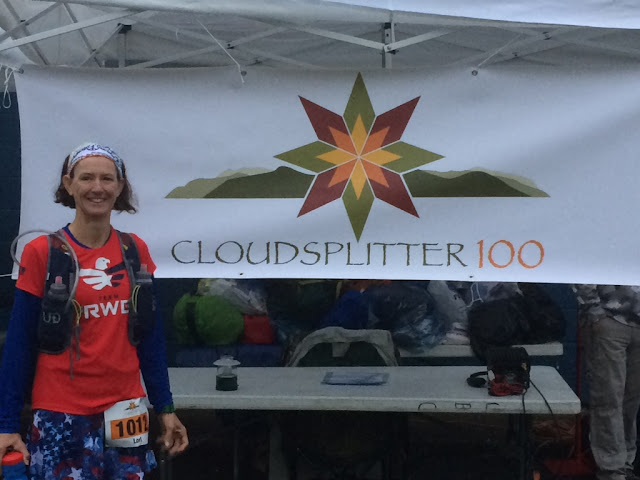 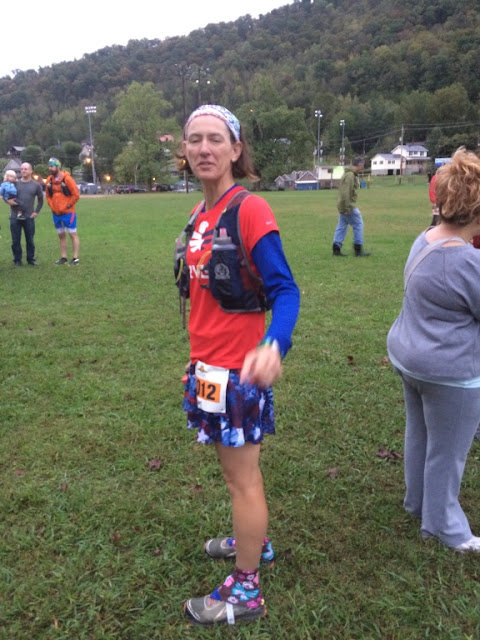 The race started out with a bang (literally, they started it with a shotgun).  The rain started right on cue as well.  I ran, chatting with Morgan, for the first mile along the road.  As we hit the mountain, I said goodbye, as we started the long climb up.  The first 7 miles are along atv trails and is one long climb up the ridge (with a few downs).  Going down to Goldfish Pond aid station would have been more appropriate with a sheet of plastic.  The mud was terrible.
About 10 miles in, you start running the ridgeline.  It’s smooth rock with just some painted lines on it.  It was slick and hard to follow in the daylight.  I was not looking forward to the dark. At this point, my stomach was so knotted up, that I seriously considered turning around at the 25k point and making it a 50k. It was an honorable option, given the weather conditions.  I was mad at myself.  After a few (long) minutes, I snapped out of it.  I realized that I would forever feel guilty if dropped to the shorter distance.  My choices were the culprit, so I was going to tough it out.   From then on it was onward.   I came up to the Birch Knob aid station smiling and happy to see Mark. 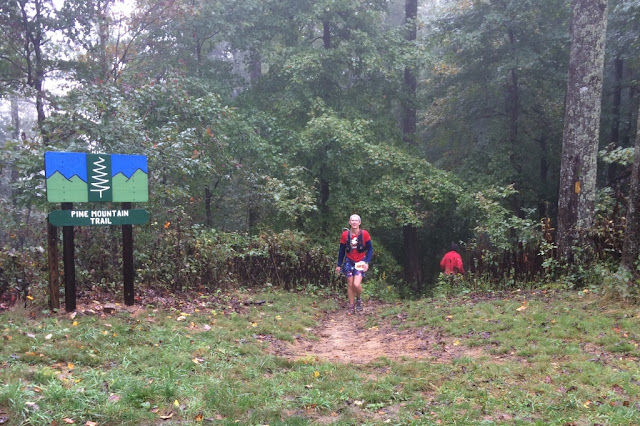 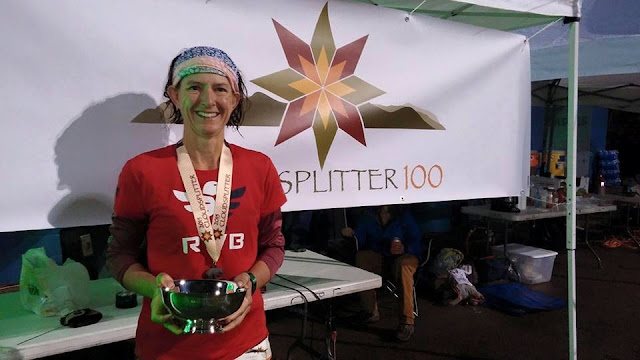 As for driving, it worked out well.  Not only would Mark not have been able to make it to Birch Knob due to the road conditions, but my Dad happened to be in Lexington on Sun afternoon, so we were able to see him for lunch. 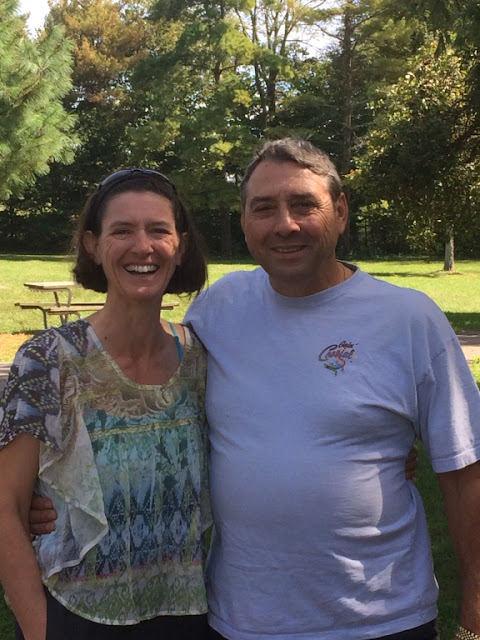